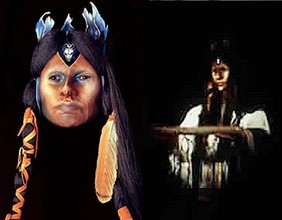 With this pipe, walk the living prayer.
Your feet upon the Earth, the pipe stem reaching into the Sky.
Your body is a bridge, between the Great Above and the Great Below.

We are one: Earth, Sky, Man, Woman, We are all relations, all one family.
Those who keep the pipe number few. Yet I have not forgotten my promise:

White buffalo calves are born again, because I am returning.
To knit the world above and the world below together again.

Long, long ago two young men were part of a hunting encampment in the rolling hills of the great prairies. As they scanned the horizon, among the long, waving grasses, they saw in the distance a light approaching. As the light drew nearer, they it became the figure of a luminous woman, walking through the prairie grass with long, flowing hair, carrying a bundle on her back.

These men were of two very different natures. The first man who saw her approaching looked upon her only with lust. He saw that she was a beautiful woman, alone and undefended in the wilderness, and he went toward her with intent to take advantage of her. As he approached, the mysterious woman opened her arms and drew him to her.


As the other young man watched, he saw a brilliant light surround them. And after a short while, the woman opened her arms. From her shawls fell the bones of his companion. They fell from her arms, and crumbled to dust, quickly scattered to the four directions by the prairie winds.

The second young man was what was called a True Warrior. His desire was only to serve the greater needs of All Our Relations, to align himself in his intentions with the sacred Hoop. He spoke to this radiant woman with awe, and begged her to come to his people, to teach them. "Yes", she said to this good man, "I will come if you will go before me and prepare a lodge."

A great lodge was made. When all were gathered, the woman walked into the village, entered the lodge, and opened her bundle, revealing a catlinite pipe with a long feathered wooden stem. And then she taught them the sacred pipe ceremony.

"The bowl of this pipe" she told them, "is of red stone, and it represents the Earth, our Mother and Grandmother. And carved into the bowl is a buffalo calf, who represents all the four-leggeds who live upon our Mother, and who sustain us. The stem of this pipe is wood, which represents all the growing beings upon the Earth. And the feathers which adorn the stem are the feathers of the great Eagle, and they represent the winged ones. All these peoples are united in the pipe ceremony. When you pray with this pipe, all send their prayers with you to Wakan Tanka, the Great Spirit."

When she had given her teachings, the holy woman left the village, and walked out into the prairies alone. As they watched, in the far distance she stopped at a buffalo wallow. There, she rolled on the earth, and as the dust cleared, there stood a white buffalo calf, a white buffalo calf that disappeared as it ran into the distance. And the people named her "White Buffalo Calf Pipe Woman".