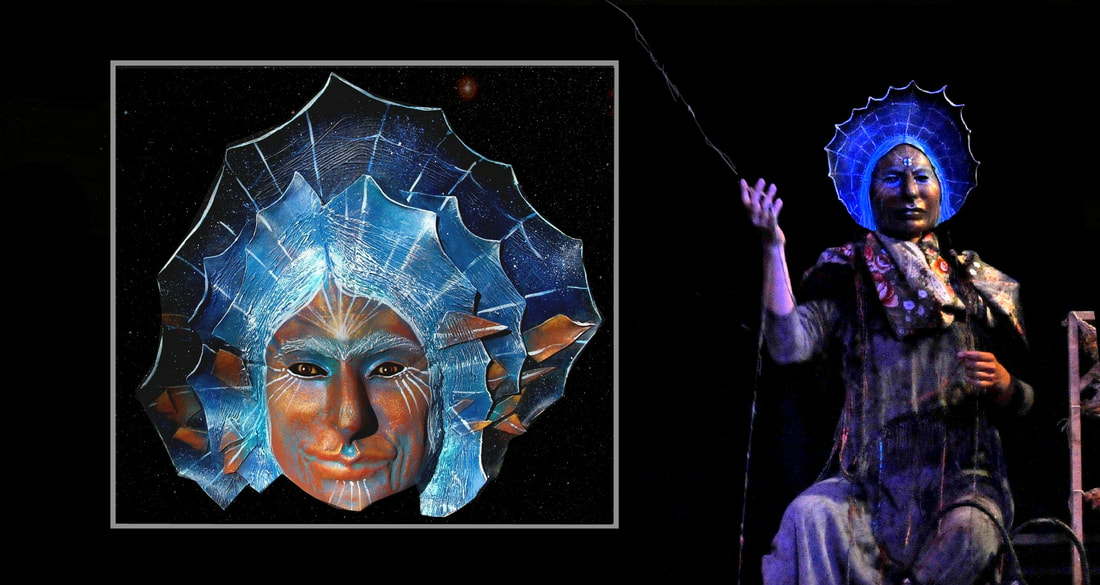 "What might we see, how might we live if we saw the world with a webbed vision? The world seen through a web of relationships - as delicate as spider's silk, yet strong enough to hang a bridge on."

Some Random Notes on the Legend of the Spider Woman

Spider Woman was the first weaver, bringing order and form, balance and symmetry to primal, formless chaos. Everything she created, each shining strand, she spun from within herself .....she spun the strands that became the first stories that became the world. And then with her hands she wove the threads, she wove a great Web that touched all things. And she taught this art to all her children.

In cultures with oral traditions stories don't end after two hours in a theater, or when we turn off the electronic box. Storytelling, in native traditions, is more than a way to pass on history and religious beliefs to the next generation - it is also a ceremony that acts as a link between the archetypal beings and the people themselves, whose ritual life is based on their mythic cycles. Even today when we talk about “spinning a good tale“, we're participating in something that keeps weaving generation into generation, back into the past and evolving forward into the stories of those who are yet to come.

The Navajo ( Dine`) revere Spider Woman (Na'ashje'ii sdfzq'q) for teaching them how to weave. To this day, an infant Navajo girl will have a bit of spider web rubbed into the palms of her hands so she will become a good weaver. Wool rugs often have “Spider Woman's Cross” woven into the pattern, representing balance, the gestalt of the four directions. 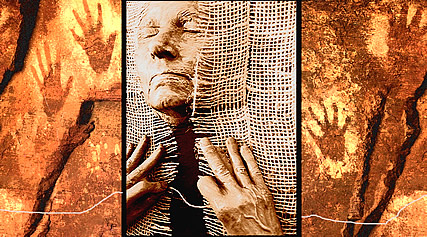 According to cultural anthropologist Carol Patterson-Rudolph,

"The Navajo have their own version of Spider Woman. As with all metaphors, Spider Woman is a bridge that allows a certain kind of knowledge to be transmitted from the mundane to the sacred dimension.........they believe that an individual must undergo an initiation before he or she can be fully receptive to this kind of knowledge. Thus, to the eyes of the uninitiated, Spider Woman appears merely as an insect, and her words go unheard. But to the initiated whose mind has been opened the voice of this tiny creature can be heard. This is the nature of wisdom, conveyed through the metaphor of Spider Woman. 1"

Spider Woman appears throughout the Americas - the "spider and cross" symbol has been found extensively throughout the art of prehistoric Mississippian peoples. And there are many stories of "Grandmother Spider" found among different tribes. Spider Woman is found elsewhere as well. She is among the Greek Fates that weave destiny, Arachne, and hidden away within the Odyssey - for Penelope's name means "with a web on her face" - the one who sees "with a webbed vision". And in the Southwestern part of the United States, which includes the rich cultural traditions of the Pueblo peoples and the Navajo. The Pueblo peoples, from northern New Mexico to the Hopi mesas of Arizona, are believed to be the descendants of the vanished Anasazi who built cities, cliff dwellings, and ceremonial centers throughout the area.

Ts' its' tsi' nako, Thought-Woman, the Spider
named things and as she named them they appeared.
She is sitting in her room thinking of a good story now:
I'm telling you the story she is thinking.

In Pueblo mythology Spider Woman also called "Thought Woman'" is a creatrix in union with Sun Father. She imagines, and as she does so, they become. The creative impulse originating from the primal center of the Web is an eternally generative thread, continually expanding and being re-woven by all beings. There is something very "Quontum" about that.Spiderwoman has a way of getting around. And today? I think there are many contemporary ways Spiderwoman makes herself known. Ecologists speak of the great Web of life, while physicists speak of entanglement theory. I like to think that the Internet is Spiderwoman's latest appearance. When ceramic artist Kathy Space and I began our community sculpture project we conceived of a wall of "Icons" composed of participants faces and hands made of red terra cotta clay. Each unique, and yet all holding a thread weaving them together, a thread that disappears out the door...........

A cultural paradigm is founded upon mythic roots - the "warp and woof" from which the ideas of a culture grow. So what are those threads? Do they show us how to “walk in beauty” as the Navajo teach? Spider Woman's hands are our hands, weaving the New Stories. So perhaps the only real question is an ethical question, as well as a creative one. “What are we weaving?” Competition, or cooperation? Estrangement, or "a Webbed Vision"? I have found that Spiderwoman delights in all things connected, co-creative, collaborative, cooperative, communicative - all those “co” words. Warp and weft.

May we all rub a bit of spider web into the palms of our hands.

“What patterns reveal themselves in the tensions, contradictions, and contrasts of the many becoming one
in me and in the world? What in my public warp of relations, in my private woof of introspections, do I divine? “

Catherine Keller, Theologian
"The new myth coming into being through the triple influence of quantum physics, depth psychology and the ecological movement suggests that we are participants in a great cosmic web of life, each one of us indissolubly connected with all others through that invisible field..... In our essence, we are one." 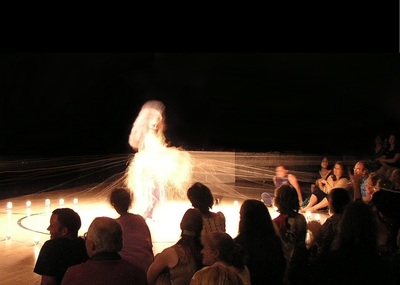 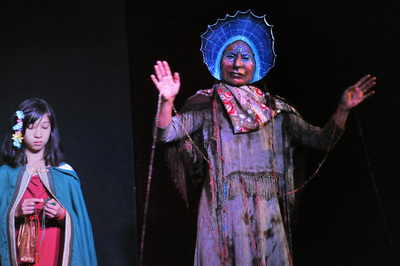 2 "warp and woof : the foundation or base of something ." (Old English owef "weave on") (Webster's Dictionary)

4 "In Homer 's Odyssey , Penélopê is the wife of Odysseus. Her name is understood to combine the Greek word for web or woof and the word for eye or face." (Wikipedia)