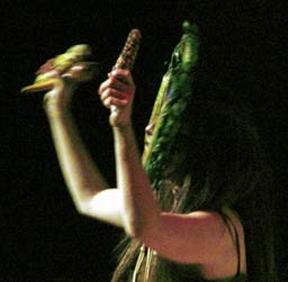 "And where corn is the Corn-Mother is also.
‘This thing they call corn is I'."
Marilou Awiakta
"SELU:  Seeking the Corn Mother's Wisdom"

Corn Mother has many names.   Among the Cherokee people  she is called Selu.

Perhaps, even as the forces of modernism destroy so much of the natural balance, Corn Mother offers us still another chance to weave our way back into good relationship.
The stories of the Corn Mother are always about loving sacrifice and generosity, and understanding that without the reciprocity of gratitude the blessing of the corn will end.

In the Cherokee story, Selu's sons witnessed a mystery they could not understand -  Selu creating of the food that sustained them.   Being young and ignorant, they resolved to kill their mother, fearing her "witchcraft".  Knowing she could not give them wisdom,  Selu told them to bury her dismembered body in the earth.  thus preserving the seed corn,  Her very essence.  They obeyed Selu, and in the spring Selu returned with the new corn.  And in this way Selu's grandchildren came to understand the means to survive, and the sacrifice of the Corn Mother.

I believe it is not too late for us also to be  "seeded", given sustaining kernels to pass on,  to preserve.  I like to think my own story of the  rainbow mask of Corn Mother was such a kernel from the mysterious hand of Selu, graciously teaching us how to dance.

I had given masks to choreographer Manna Youngbear. Several weeks before her event, I attended an event at the Naropa Institute in Oakland, founded by Matthew Fox. As I sat on the floor, I found myself absorbed by a vision. When I closed my eyes I saw a Native American woman dancing. I opened my eyes, and closed my eyes again, and still she danced in my imagination, ears of multi-colored corn in her hands. When I returned to my studio, I made a mask with corn on each side of the face.

I had been reading about Black Elk, the Lakota teacher. As a young boy, he foresaw the destruction of his people, what he called the "hoop" of the Lakota nation. But he also prophesied a "hoop of the nations": a great circle, composed of many interlocking circles, that would someday come to be. A Rainbow Tribe. I painted a rainbow on the mask's forehead, because the children of America are now of all colors.
​
"When I held up an ear of calico corn" Cherokee poet Marilou Awiakta wrote, "we would think about this wisdom of the Corn Mother. How the different kernels are ranged around the cob, no one more important than the other. How each kernel respects the space of those on either side, yet remains itself - red, black, white, yellow or combinations of those colors. How the Corn-Mother, in Her physical being, exemplifies unity in diversity."

Just before her performance, I learned there was one dancer in Manna's cast who had no mask, Christy, who felt inspired to dance Green Corn Woman. Now it seemed she had her mask. 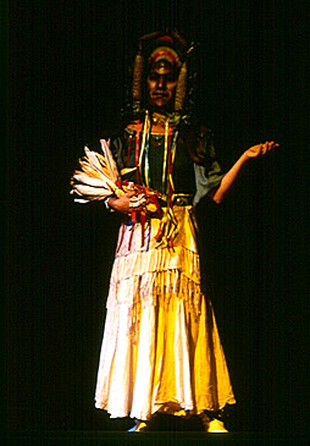 I made a bouquet of corn for Manna's wedding, with a necklace of rainbow beads I bought at a garage sale. I later used this same bouquet I to dance Green Corn Woman.
Manna is part Cherokee, and when she cast her show, she asked if I wanted to dance Corn Mother. We didn't have a mask for her, but I was inspired to dance anyway. I knew very little about the Native American Corn Mother, and planned on doing some research. Along the way, I remember stopping at a used bookstore. Opening a rather esoteric book at random, I discovered I was looking at an article about the Corn Maiden. I was further stunned to find it illustrated by Vera Louise Drysdale. Vera was my friend, years ago, when I lived in Sedona.

And so, without any further urging, I was ready to begin. The feeling of familiarity continued as I created a costume. I was looking           for materials I would need, and within a few days, Manna left a message. "Christy" she said, "There is a Hopi woman visiting Isis Oasis Retreat Center, and you need to meet her! She gave me some 300 year old corn meal to give to you!"
Once again, I felt Selu encouraging me! I thought about what She meant to me personally. To me, Selu is about the wealth that comes from the work of forgiveness. How can we be fed and sustained, how can we create peace, if we cannot practice the lessons of forgiveness, if we cannot learn tolerance and compassion for our differences? That is the beginning place for the cooperation we will need in order to evolve into a global family. In America, we have mixed bloodlines, "rainbow blood". Especially as Americans, our challenge is to understand our true relationship to each other. I've always conceived of the Rainbow as actually being a circle. Half of the rainbow disappears into the ground, into an underworld realm, where it exists beneath the Earth, hidden, but present. Like the Corn Mother. Aren't we all Her children? Perhaps, what she gives us now is the means to seed a rainbow vision.

We received the new mask at the time of the lunar eclipse, in May of 2002, and decided it was an auspicious time to consecrate it with our dried corn. As we did, a flash of light went off in the room! At first we thought it was a light bulb that blew out. But no electric lights had been turned on in that room. We looked at each other amazed, and felt the presence of Corn Mother.
​Photographs are by courtesy of:  Jerri Jo Idarius, Ileya Stewart, Thomas Lux, Peter Hughes, Ann Beam and Lauren Raine