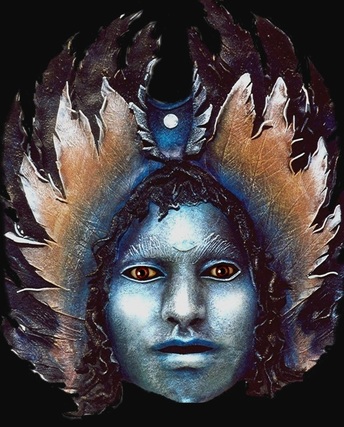 LILITH, in Biblical mythos, was created with Adam, the first man. Because she would not submit to him, Lilith fled into the wilderness, banished from Eden. A Sumarian deity, Lilith is viewed by some scholars as originally the dark or night aspect of Inanna. The owl is Her totem, and she is often shown with wings. Lilith embodies, to me, the essence of female eros: capricious, creative, seductive, potent, fertile, and self-willed. In religious traditions that have subordinated women, Lilith was both terrifying and dangerous, and by the era of the historical Bible, Lilith had become a fearsome demon.

Cast into the wilderness of our collective unconcious, Lilith the unsubmitted became the succubus, the predatory bird, the siren, the harlot. Once the blessed midwife who assisted women to birth at midnight, Lilith became the "eater of children". The word for "whore" and "harlot" is derived from words that once meant "priestess" and "fertile" (hora, hara). In the language of culturally transforming myth, often revealed in the origins of language, no Goddess was scapegoated more than Lilith, despised as "the great whore".

The Goddess who became a demon is not only misunderstood, she is a great teacher. Lilith is all the things we are most terrified of: the fire of erotic desire, the ferocity of our free, spontaneous creative urges for self expression, and the rage of a world out of balance. Repression can mask psychic energies, but cannot eliminate them. Driven underground, they gain destructive "shadow" power. During the Inquisition, millions of women were brutally tortured by the Catholic Church, by a hysterical sexual misogyny carried out in the name of God. Today, in Africa and the Middle East, thousands  girls are initiated into their womanhood by genital mutilation. In the United States, a violent rape happens every 5 minutes.

The wound of Lilith, and Her rage, continues. To reclaim Lilith is to remember a time when women walked fearless in the night, and danced beneath the sun as co-creators with men, when sexuality was joy and not shame, when our bodies were no less than the Body of the Goddess.

David Jeffers is an urban mystic, a songwriter, and a scholar of the Kabbalah. In 2002 he graciously granted me an eloquent interview about his music, and spoke about Lilith, his life-long Muse, dreamtime teacher, and psychic healer.

I think Lilith has always been with me. My first talisman was a pair of owls feet. I later learned Lilith is shown with the feet of an owl.

My brother wanted to teach me to shoot a gun. So we went out hunting one day, and he shot at a chicken hawk in the woods, but it was an owl that dropped to the ground. My brother was horrified that he had shot an owl. I said "Give me your knife. I want the feet", and I cut off the owl's feet after it died, took them home, and tied them together with a black ribbon. I was about 8 years old. I always carried those owl's feet with me when my father beat me.

Many years later as adult I was in bed, in that state of wakefulness just before you fall asleep. I felt an enormous force come over me, pinning me down. I could not move! Only when I surrendered was it no longer frightening. And at those times, I remember hearing a terrifying sound, like screaming whistles and grinding stones, deafening. This occurred for quite a while, and it finally changed when I began to encounter Lilith in the dream state, when She took on a human form.

What was the meaning of that sound? I think it is what we perceive as "sound" when people cross thresholds, interplane abysses or dimensions of being. The threshold experience that bowls you over, the sound that inspires absolute terror. And I think we misunderstand terror. Terror is sometimes the prelude to transformation, a state of opening to the unknown. Our notions of fear fall under superficial ideas of duality. Nice things are good, scary things are bad.

Metaphysically speaking, there is something about the recognition of a power so much greater than yourself, a power undeniably potent. It brings you to your knees. Which means, to me, Lilith is anti-ego, She is about going beyond our egos. That's what devotional mysticism is about.

I was working with the Kabbalist Tree of Knowledge, and Lilith is within the mystical traditions of Judaism. There are medieval images of Lilith at a certain level within the alchemical Tree of Wisdom. Eventually, in this mystical system, the seeker will meet Lilith. I was ready to meet Her.Lilith was the only deity within that tradition who could help me, the only one who could help me with my rage, my pain, with the work I needed to do to heal my abuse. Therapy only took me so far.  I had to be unraveled. I had to be re-woven.

Lilith was the guide appropriate to the emotional work I had to do. I was ready when I prayed: "Send me One who is divine". I didn't know at the time that I was invoking Lilith, but there was no doubt who She was when I saw Her in my dreams, appearing as a disheveled young girl. Her identity was immediate for me.

In my first dream of Lilith, I took a gardenia from Her room. She came screeching after me as a pubescent girl, utterly enraged. How could I take something from Her house?  I said.. "I can keep the flower if I want, because it's my dream."  She told me I was wrong.  All dreams are mine" she said, "because you are now in my world, and you will respect that I am the Queen of this world. You come here when you are asleep, and you are on my ground." The key to Lilith for me is what occurred when I said "I'm really sorry". Then her manner changed.

The pain of Lilith is so much, to me, about the divinity of human pain. I once told my therapist "All I ever really wanted was for my father to say "I'm sorry", and mean it. My therapist said to me, "Honey, I'm sorry that happened. " I understood that anyone could say that to me, and it would be good, it would be a healing acknowledgement. This is the same feeling I had in my dream. Apologizing to Lilith in the dreamstate changed how She dealt with me. Her rage ceased, and I felt Her appreciation for having received something She needed. Then our relationship became "Well, maybe we can work something out." She was willing to deal, which is a very Middle Eastern quality. She was willing to bargain.

In the Middle East, you are expected to negotiate, because it represents an exchange of offerings, coming to a conclusion that works for both parties, equality.I asked Lilith if I could pay for the flower with a five dollar bill, and gave it to Her. She said She'd give me change, and put five ancient coins of the Near East into my hand. Each was worth a fortune, worth so much more than what I offered to pay. She gave me a gift of immeasurable value, and I watched the gold coins melt in my hand, absorbed into my bloodstream, my being. Lilith told me we could now speak the same language and communicate with each other. That dream was the beginning of a dream relationship that lasted for 10 years.

People often only identify with Lilith's rage, the woman who was cast out because She would not accept inequality. For me the archetype is not that simple. If you can't go beyond Lilith's first door, which is rage, you're going to be stuck, you aren't going to penetrate the emotional mysteries beyond. Lilith is the essence of mystery, the most intelligent archetypal power to aid in understanding the mechanism that underlies our unconscious motivations.

Lilith is the ultimate Dark Goddess, because she is about the ability to connect the subconscious to the conscious mind, so that information can become conscious and usable in your life and on your path. Lilith is the bridge. Why, when Lilith was depicted in alchemical art as the serpent in the tree, did she want to make Eve wise? Because it is good for your eyes to be opened, to know the truth, to not be naive. That's all Lilith really offered.

People who are linear in their thinking, for example, suddenly find their world shattered when Eros shoots arrows at them. Or when they have an experience that is inexplicable or traumatic, something that cannot it into the model they've organized their lives around. There are references in the Kabbalah to what is called"breaking the shell". The mind set of "what you believe" is the shell, and Lilith is about breaking the shell.

You have to fall apart sometimes to be put back together, because that's the only way you can be reconstructed. You cannot veneer the teachings of Lilith on top of "who you think you are".