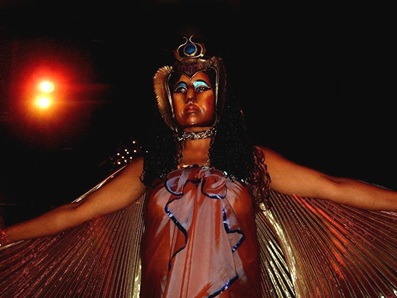 Isis is perhaps the most important, and most universal,  goddess in later Egyptian mythology.  She became a goddess of cosmic importance throughout the ancient world, from Egypt to Rome, and even into early Christianity.  Few people know that Paris, France was named after the Goddess - "Par Isis", place of Isis, and the name Isis is still a beloved name among modern coptic Egyptians.  Many scholars believe that the significance of the Madonna and Child has it's origins in earlier ubiquitous religious iconography of Isis with her son, the infant Horus.  Many also believe that the many Black Madonnas found in medievil Europe originated in imagery of the pagan Isis.  Isis is often shown with her wings enveloping or protecting the dead, and these images of the winged Isis may be one source of inspiration for the winged angels.

In the Egyptian Book of the Dead, Isis was described as "She who gives birth to heaven and earth, knows the orphan, knows the widow, seeks justice for the poor, and shelter for the weak''. Some of Isis' many other titles were 'Queen of Heaven , Mother of the Gods , The One Who is All , Lady of Green Crops , The Brilliant One in the Sky , Star of the Sea , Great Lady of Magic , Goddess of magic, fertility, nature, motherhood, and underworld Mistress of the House of Life , She Who Knows How To Make Right Use of the Heart , Light-Giver of Heaven , Lady of the Words of Power , and Moon Shining Over the Sea".

Isis was pictured as a woman wearing a long sheath dress and crowned with the hieroglyphic sign for a throne , sometimes holding a lotus. After her assimilation of Hathor, Isis's headdress was replaced with that of Hathor: the horns of a cow on her head, and the solar disc between them. Usually she was depicted with her son, the god Horus, and sometimes as a bird flying above Osiris's body. Isis is most often seen holding the ankh sign, but is sometimes seen with Hathor's attributes, the sacred sistrum rattle and the fertility bearing menat necklace.

"The Transformations of Lucius", from the first century, describes a mystical encounter with the Goddess, and perhaps provides the best understanding of the significance of the great Mother Goddess, whose image, some scholars say, survived in later years as the origin of the "Black Madonnas".

"You see me here, Lucius, in answer to your prayer. I am nature, the universal Mother, mistress of all the elements, primordial child of time, sovereign of all things spiritual, queen of the dead, queen also of the immortals, the single manifestation of all gods and goddesses that are, my nod governs the shining heights of Heavens, the wholesome sea breezes. I am known by countless names. . . some know me as Juno, some as Bellona . . . the Egyptians who excel in ancient learning and worship call me by my true name, which is Queen Isis."