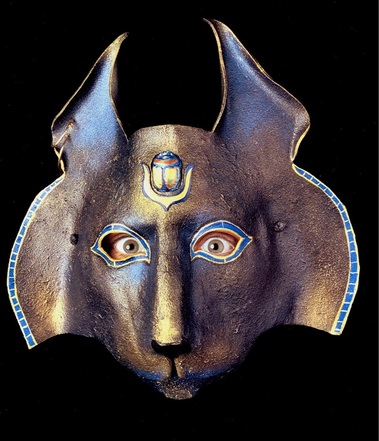 The Egyptians loved their cats, and mummified felines protected by BAST have been found buried with their human companions. BAST, cat-headed Goddess of ancient Egypt, was playful, graceful, mysterious, inspiring and protective, a powerful guardian against evil influences with Her ability to see in the dark.

When I left my home in New York, my former husband and I sat at our usual restaurant having breakfast together for the last time. I remember saying that I wished I had a cat to travel with me.

Within minutes, among the magenta cosmos blooming in the flowerbox outside that old New York diner, I noticed two kittens chasing each other. One of them, a white kitten, paused and looked directly at me through the glass; rearing on his hind legs, he scratched his paws on the window before leaping off. Needless to say, I asked the cook about this feline visitation. Within minutes, he returned with a terrified, half-siamese feral kitten in a box; the very one I had seen, one of many they fed from scraps at the restaurant. And when I left my home that day, I was accompanied by a small being in a box who was also leaving home.

As I drove South, I passed the civil war battlefield at Shiloh. It was a strange, white, fog-shrouded day, a landscape with no visibility, adrift with spirits. My new companion became Shiloh, the Ghost Cat. Because, as I passed through that place of unquiet memory, I found myself passing through my own no-man's land, a transitional border world that also seemed inhabited by ghosts. The years that followed were wandering years, seeking a new home and new self. And Shiloh was always with me, riding with his friendly little cat paws on my shoulder as he sat on the back of my seat. Shortly after I settled in California Shiloh was hit by a car. I have many, many times missed his wise animal love.

Now I have a back door that faces an empty lot, inhabited by a nocturnal tribe of feral cats. As they always run away from me, several weeks ago I was surprised when a sickly kitten stood meowing before the door. When I opened it, he walked in, and even briefly let me touch him as I placed a bowl of food before him. I hoped he would come back, but he didn't.

As I write this, I'm making a mask for Bast, the Cat Goddess of ancient Egypt. Because this morning, as I opened the door, the kitten lay barely breathing on my doorstep. The vet told me he was too ill to survive, and so I was forced to put him to sleep. I do not know why he came to me to die. I feel saddened, yet also honored. I think of him, and I think of Shiloh, as I make this mask, as I bury this little life. Not all Goddesses wear human forms.

"The door is open now, wide open. The moon is bright.
I see you, I see you now, safe at the warm breast of Bast."